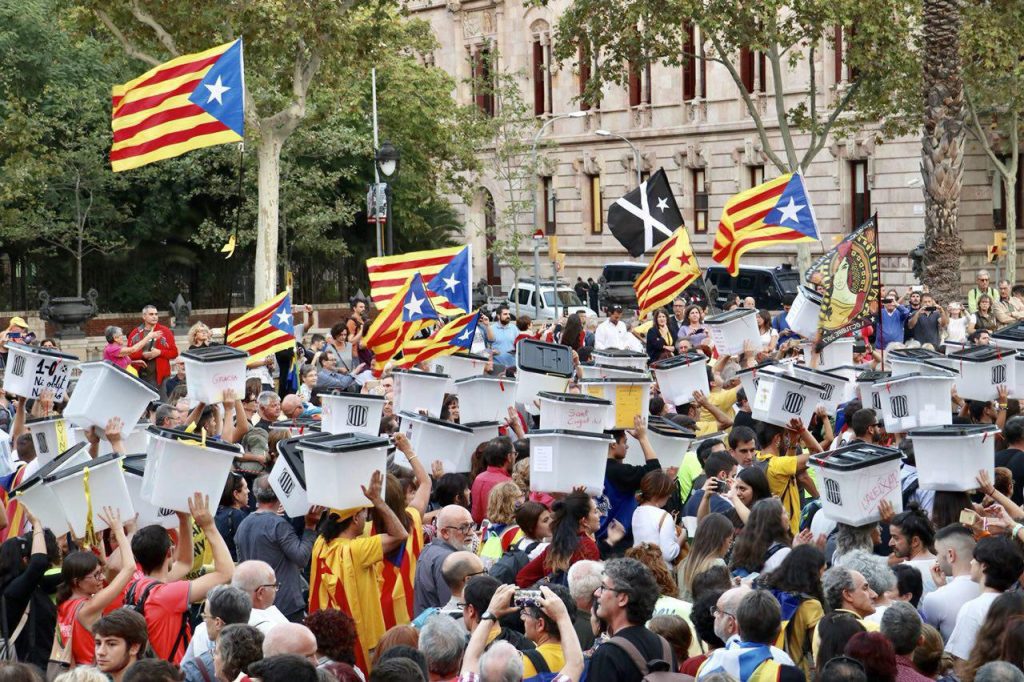 A year ago today, over two million people voted in the Catalan referendum for self-determination, and 90% of them voted in favour of independence. Today Catalans have gone out onto the streets in a mass demonstration in favour of the resulting democratic resolution which was formalised in the Declaration of Independence announced by the Catalan Government on 27 October 2017 but which the majority enjoyed in the Catalan Parliament by the independence parties has yet to make effective.

The Spanish State suspended Catalonia’s devolved government for having allowed its people to vote on self-determination, a right that is recognised in the UN Charter. It also imprisoned without charge the leaders of the two main independence organisations and seven MPs, whilst another seven MPs had to seek refuge abroad. These included the President of Catalonia, the Vice-President, and the Speaker of the Parliament.

Today a huge demonstration paraded down the main streets of Barcelona city centre until it reached the Catalan Parliament building, where it sent a message to the MPs of the independence parties: “On 1 October we voted and we won. Now is the time to implement the result.”

Events Everywhere and Stoppages at Workplaces
Today, as during the entire weekend, dozens of town and village councils have organised events in the places where people voted a year ago. In many of them they recalled the police charges that injured over a thousand citizens who had gathered peacefully to vote. Recently Amnesty International and Human Rights Watch have criticised the fact that the Spanish Government has still not started an investigation into those occurrences.

At midday many work places followed the call by ‘Plataforma 1-O’, which has coordinated the action taken today and during the past few days, and stopped work so that the workers could commemorate the referendum in the street.

At international level the foreign branches of the Catalan National Assembly (ANC) are also organising events to express support for the result of the referendum, showing documentaries of the voting on 1 October, as well as exhibitions of photos and of the ballot boxes that were used. This is taking place in Brussels, Buenos Aires, Cologne, Copenhagen, Frankfurt, Glasgow, Hamburg, Luxemburg, Mexico City, Quito, Stuttgart and The Hague.